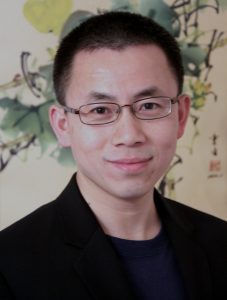 Jianjun Cheng obtained a B.S. degree in Chemistry at Nankai University, China, in 1993, a M.S. degree in Chemistry at Southern Illinois University at Carbondale in 1996, and a Ph.D. degree in Materials Science at the University of California, Santa Barbara in 2001 with Professor Timothy Deming. He was a Senior Scientist at Insert Therapeutics, Inc. from 2001 to 2004, and a Postdoctoral Research Scientist at MIT with Professor Robert Langer from 2004 to 2005. He joined the faculty of the University of Illinois at Urbana-Champaign (UIUC) as a tenure-track Assistant Professor in 2005, and was promoted to Associate Professor in 2011 and Full Professor in 2015. In 2016, he was appointed as Hans Thurnauer Professor of Materials Science and Engineering at UIUC. Cheng is the co-inventor of 41 issued patents and co-authored over 200 publications. Cheng’s research has made translational impact. Two nanomedicine systems he co-developed has made to clinical trials. He received a Prostate Cancer Foundation Competitive Award in 2007, a National Science Foundation CAREER Award in 2008, a Xerox Award for Outstanding Research at UIUC in 2010, a NIH Director’s New Innovator Award in 2010, the Willett Faculty Scholar Award in 2013, and the UIUC Distinguished Promotion Award in 2015.  He was appointed as an Associate of Center for Advanced Study at UIUC in 2014.  In 2015, he was selected as one of the four inaugural Faculty Entrepreneurial Fellows in the College of Engineering, UIUC. He has also been on the list of Teacher Ranked As Excellent By Students for five times at UIUC.  Cheng is Editor-in-Chief of Biomaterials Science, Royal Society of Chemistry, UK. He is a Fellow of the American Institute for Medical and Biological Engineering (2015), a Fellow of American Chemical Society-Division of Polymer Chemistry (2015), a Fellow of American Association for the Advancement of Science (2016), and a Fellow of National Academy of Inventors (2020).